Regulation of the Day 204: How to Buy Liquor

Self-checkout lanes have been popping up in grocery stores across the country over the last several years. Some people worry that without the adult supervision of a cashier, underage kids might be able to illegally buy alcohol at these self-checkout lanes. California state Rep. Fiona Ma even introduced a bill that took effect on January 1 that prohibits Californians of any age from using self-checkout lanes to purchase alcoholic beverages.

Has this been a huge problem in the past? Two independent studies have been done to find out. A 2009 UCLA study, cited by Rep. Ma to support her bill, found that underagers failed in 80.5 percent of their attempts. A separate study done by researchers at San Diego State, found that young hooligans had a 90.6 percent failure rate.

So yes, kids can buy booze at self-checkout lanes. But it’s probably less successful than other methods. As Joe Eskenazi put it in SF Weekly’s blog, “The best way to get alcohol remains to rely on a fake ID, theft, or someone’s skeezy 23-year-old cousin.”

Of course, there is another factor in play here, and likely Rep. Ma’s real motivation. That factor is rent-seeking. Many grocery cashier jobs are unionized. The more people use self-checkout lanes, the less they use the cashiers. Unions don’t appreciate the competition, so they work with lawmakers like Rep. Ma to legislate their preferences over consumers’.

According to Maplight.org, labor interests donated $150,450 to Rep. Ma’s campaign fund in 2009-10. They are by far her largest contributors.

This is an example of what economist Bruce Yandle calls a Baptist-and-bootlegger problem. Back in the old days, many Baptist preachers favored Prohibition because they believed drinking was morally wrong. Bootleggers favored Prohibition, too. Black market profits are far higher than in legal markets. So the bootleggers would manipulate the Baptists into favoring a bad policy by using the language of morality.

Fast-forward to today. Almost nobody wants increased underage drinking. And unions don’t want competition. So the bootleggers make up a story about how automated checkout lanes are causing runaway underage drinking. Social conservatives jump on board, wanting to strike a blow for morality. The bill gets passed, the Baptists feel good, and the bootleggers financially benefit. So do legislators.

Consumers, of course, are left out of this coalition.

Posted in Economics, Public Choice, Regulation of the Day

Vice President for Strategy Iain Murray discusses the labor reforms that have led to a thousands-strong sustained protest in Madison, Wisconsin. While the reforms themselves are relatively minor, both sides know that the stakes are high. This may prove to be at a watershed moment in the relationship between public sector unions and taxpayers.

Comments Off on CEI Podcast for February 24, 2011: On, Wisconsin

How to Lie with Statistics

Posted on October 5, 2010 | Comments Off on How to Lie with Statistics 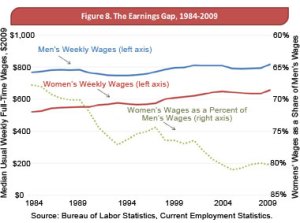 Steven Landsburg uncovers a whopper. Take a look at this graph for a second. Pay special attention to the right-hand y-axis. Then click on over to Landsburg’s blog post to find out what’s wrong with it.

Comments Off on How to Lie with Statistics

Posted in Economics, Fun with Statistics, Price and Wage Controls