Prohibition ended 79 years ago, but in Washington, D.C., it is still illegal to buy liquor on Sundays. Fellow in Consumer Policy Studies Michelle Minton thinks these blue laws need to be modernized.

Comments Off on CEI Podcast for July 5, 2012: Relic of Prohibition

Regulation of the Day 207: Cold Medicine

First drain cleaner, now cold medicine. These are lousy times for Illinoisians with sluggish drains and runny noses. Just as they are now required to present valid ID when buying drain cleaner, the people of Illinois have had to do the same thing since 2009 when buying cold medicine. But according to a new bill signed into law Friday, “Now stores will transmit those records electronically to state police. The information sent to authorities will include the customer’s name and address.”

No person may buy “more than 7.5 grams of pseudoephedrine in 30 days – or more than a month’s supply of 24-hour Claritin-D for a single person.” Stores must refuse such sales.

The goal is to put a damper on methamphetamine production. The regulation is easy to evade, though. Instead of one person buying large amounts of medicine, several people can buy smaller amounts. Or our drug-addled friends can take a short drive to Indiana, Wisconsin, or another border state. Or they could make meth from different ingredients. Or they could switch to a different drug entirely. The total net impact on drug production and consumption is likely to be almost precisely zero. The legislature clearly didn’t think this one through; prohibition doesn’t work.

This regulation is something else besides ineffective. It also reveals an ugly attitude that no state should have towards its people, that everyone is a suspect. Talk about adding insult to illness.

Comments Off on Regulation of the Day 207: Cold Medicine

Regulation of the Day 95: Buying Wine in Ohio

It is illegal to buy more than 288 bottles of wine per year in Ohio.

If you drink that much wine by yourself, then you have more important problems to worry about than regulatory compliance. But if you host of lot of parties or are building up a wine collection, you run a real risk of hitting the limit.

“The level was set to establish what would seem to be a reasonable amount for personal use,” according to the Ohio Wine Producers Association’s executive director, Donniella Winchell.

Since the law is somewhat difficult to enforce, no violators have yet been found. But when there are, the Ohio Department of Public Safety Investigative Unit will come knocking. Because while buying 288 bottles of wine is perfectly fine, buying 289 poses a threat to public safety.

Comments Off on Regulation of the Day 95: Buying Wine in Ohio

Posted in Nanny State, prohibition, Regulation of the Day

Regulation of the Day 86: Cockfighting Advertisements 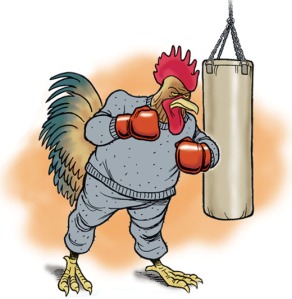 If you’re thinking of sending out advertisements for a cockfight through the mail, you should be aware that a new regulation allows the postal service to refuse to deliver it.

The same rules also covers advertisements for a “knife, a gaff, or any other sharp instrument attached, or designed or intended to be attached, to the leg of a bird for use in an animal fighting venture.”

Animal fighting is barbaric. And it is illegal in most places. The underground nature of animal fighting makes one wonder how many cockfight promoters actually advertise their events by putting fliers in the mail. Wouldn’t that just make it easier to get arrested?

If so, the USPS should be encouraging such advertising, not banning it. Driving animal fights further underground only makes them harder to eradicate.

They Can’t Even Keep Drugs Out of Prison?

The New York Times notes that Mexico’s jails are a “places where drug traffickers find a new base of operations for their criminal empires, recruit underlings, and bribe their way out for the right price.”

Amazing. Armed guards. All the bad guys behind bars. Under constant supervision. And Mexico still can’t keep drugs and drug dealing out of its prisons. The U.S. suffers from the same problem, by the way.

If authorities can’t keep drugs out of prisons, how can they expect to keep them out the hands of the general population? Maybe, just possibly, prohibition is not an effective way of stopping drug abuse.

Comments Off on They Can’t Even Keep Drugs Out of Prison?

Want to work for the federal government? You’ll have to comply with the approximately 32,463 words worth of regulations in the Mandatory Guidelines for Federal Workplace Drug Testing Programs.

Comments Off on Regulation of the Day 28: Urine Trouble Now

Posted in Nanny State, prohibition, Regulation of the Day

Regulation of the Day 19: Fospropofol

The Drug Enforcement Administration ($2.2 billion 2009 budget, 10,891 employees) would like to schedule fospropofol, approved by the FDA last year for use as an anesthetic, as a Schedule IV controlled substance. It appears to be mildly addictive in lab animals.

Comments Off on Regulation of the Day 19: Fospropofol

I don’t like guns. But I’ve always been skeptical of gun control; prohibition doesn’t work. That’s why the Supreme Court’s ruling in the Heller case, which strikes down DC’s unconstitutional gun ban, is a joy to see.

Comments Off on DC Gun Ban Struck Down

The War on Drugs

Tomorrow, another will take his place.

Comments Off on The War on Drugs