Regulation of the Day 135: Mustache Nets

CORRECTION: It appears that I’ve been had. Commenter Dietsch at Jacob Grier‘s blog points out that the article was probably an April Fool’s joke. There are such things as beard net regulations on the books in various cities. But this particularly amusing story appears not to be true; probably for the better.

Hair nets have been a staple of the food service industry for a long time. They are not the most dignified fashion accessory. But they serve a useful purpose. Just like church and state, hair and food are best kept separate. Hair nets are a much easier way to accomplish that goal than, say, mandatory baldness for all kitchen staffs.

Which brings us to the latest fad in Brooklyn’s trendy Cobble Hill neighborhood: mustache nets. For some reason,Victorian-themed restaurants and bars are all the rage right now. Bars are redecorating with old-fashioned furniture and artwork. Bartenders are redecorating themselves with outlandish 19th-century facial hair, from mutton chops to handlebar mustaches.

Unfortunately, a regulation from approximately the same time period is getting in the way of all this nostalgic fun. New York State law requires all persons with facial hair who are serving food or drink to wear a mustache net.

Regulators have been cracking down on un-netted mustaches. They have cited several establishments, as Chow reports:

The crackdown was a surprise to restaurant employees—one bartender apparently panicked and attempted to hide behind a taxidermied warthog. However, many of those cited have remained defiant.

“I’d be happy to have my staff wear mustache nets—if I could find a sustainable source,” said a representative of one of the establishments targeted in the raid. “And so far, I have not found a mustache net farm whose mustache netting practices I believe in.”

Doesn’t exactly befit the image of a chic bartender. But in New York, that’s the law.

Posted in General Foolishness, Regulation of the Day

Posted on April 23, 2010 | Comments Off on Friday Regulation Roundup 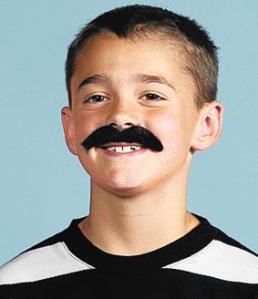 Some of the stranger governmental goings-on I’ve dug up recently:

-It is illegal to deface milk cartons in Massachusetts. The punishment is a $10 fine.

-If you aren’t quite sure about the definition of “children’s product,” a proposed regulation would clear that up. Here’s a small sampling: “A determination of whether a product is a ‘children’s product’ will be based on consideration of the four specified statutory factors as further described in the discussion and examples provided in this interpretative rule.”

-The federal government has an Advisory Committee on Immunization Practices.

-The government spends $23m per year on the National Agricultural Library.

-Stimulus money is being used to replace peoples’ mailboxes – in some cases against their will.

-Eat your vegetables: The federal government has a Dietary Guidelines Advisory Committee.

-$110,000 in stimulus money was spent on an industrial-grade, automated pizza oven.

-It is illegal for a 9th grader to have a mustache in Binghamton, New York.