Why Government Layoffs Tripled in June

Posted on August 11, 2010 | Comments Off on Why Government Layoffs Tripled in June 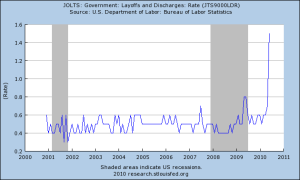 This graph from just-released Federal Reserve data caught my eye. It shows government layoffs and discharges from late 2000 through June of this year (raw data set downloadable here). Government jobs are remarkably stable. According to this BLS chart,government workers enjoy roughly three times the job security of private sector jobs. Government workers also compensated more than twice as well as the people who pay their salaries.

For most of the last decade, government workers had as small as a 1-in-200 chance of getting fired or laid off in a given month. This stability mostly held up even during recessions, which are marked as the shaded areas in the graph.

But notice the big spike that happened this June. The economy is out of recession. But times are still tough. And government deficits are at record highs. Is the sudden jump in layoffs and discharges due to government cutting spending to avoid fiscal disaster?

I’d guess not. June was when large numbers of temporary census workers finished their jobs. Still, for one shining second, I thought that Washington had come to its senses.

Comments Off on Why Government Layoffs Tripled in June 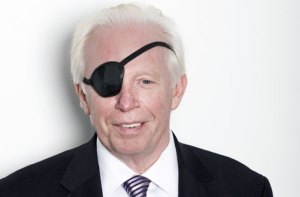 Rules protecting life, liberty, and property can create the stable conditions that entrepreneurs need to flourish. It works best when these rules are simple, clear, and few. But problems emerge when government takes on other missions.

Rules that are complicated, opaque, and numerous create instability. Entrepreneurs are less likely to invest or innovate if they fear the rules of the game might change tomorrow on a whim. Complying with regulations takes up time and effort that could be spent creating wealth. When governments get involved in business, businesses will involve themselves with government. This is an invitation to corruption, rent-seeking, and regulatory capture. Many backs get scratched, but economic growth suffers.

Dan Mitchell‘s latest video introduces the Rahn Curve, named after top-notch economist Richard Rahn, to illustrate that concept visually. Most academic studies on the subject estimate that governments that take up 15 to 25 percent of GDP is about the right size. The U.S. government consumes roughly 40 percent of GDP. That wide range is because different government policies have different effects, and because the complexity of even the smallest economies makes any macro-level study uncertain.

The academics might be guessing too high, though. Historical data from the 19th century show that the best-performing economies had governments around 10 percent of GDP. That includes the U.S. and most of Europe.

Returning to that size government wouldn’t even be particularly austere. the U.S. government would have a $1.4 trillion budget. Roughly what we had during the Clinton years.

Comments Off on The Rahn Curve

Posted in Economics, The Market Process 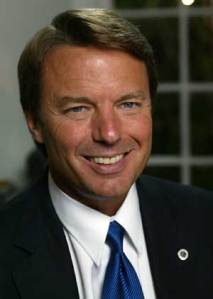 Maybe there is something to John Edwards’ “Two Americas” conceit after all. Except the warring factions aren’t the haves and have-nots. They are what Steven Malanga calls tax eaters and tax payers. And the two see the world very differently. See this revealing excerpt from today’s WSJ Political Diary (subscription required).

Pollster Scott Rasmussen uses several questions to break down voters demographically, but one of his most original tweaks is to differentiate between those voters he calls the “Political Class” and those he calls “Mainstream Americans.” The “Political Class,” representing about 14% of the electorate, tend to express “trust” in political leaders while rejecting suggestions that government is its own special interest and often works with big business against consumers. In contrast, “Mainstream Americans” represent about 75% of the voting public and identify with or lean toward a more populist skepticism about the intentions and actions of political leaders.

Striking is how the two groups divide on the question of repealing ObamaCare. “Mainstream Americans” support repeal by an overwhelming 73%, while the numbers are almost exactly reversed among the “Political Class,” 72% of whom oppose repeal.

Comments Off on The Two Americas

Sometimes I Think They’re Just Messing with Us

Here’s an excerpt from an early 1980s Office of Management and Budget report:

Posted on May 6, 2010 | Comments Off on Department of Redundancy Department

Comments Off on Department of Redundancy Department

Regulation of the Day 136: Off the Record

If you work for the Department of Energy’s Federal Energy Regulatory Commission, a regulation requires you to keep records of your off-the-record communications.

Which means off-the-record communications aren’t really off the record.

In fact, 18 CFR 385.2201(b) requires FERC to post a notice in the Federal Register whenever this happens. There was one today, for example. It’s public!

Comments Off on Regulation of the Day 136: Off the Record

Posted on March 1, 2010 | Comments Off on Voltaire on Government 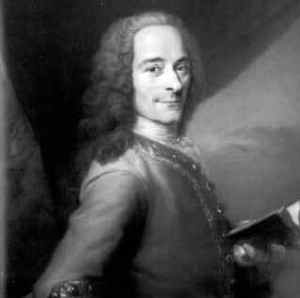 Voltaire defined government as  “a device for taking money out of one set of pockets and putting it into another.”*

It appears Keynesian stimulus was debunked two and a half centuries before Keynes even came up with the idea. Economic growth comes from the creation of new wealth. The best government can do is shuffle around wealth created by others.

Comments Off on Voltaire on Government

I am shocked — shocked — that $6 million of stimulus money went to a company accused of “overbilling, bribery of union officials and other alleged improprieties on several large New York projects.” Such lapses in oversight never happen with government spending projects!

Comments Off on Dog Bites Man

Is this Grounds for Pessimism?

The budget for the federal government is currently over $2.5 trillion. Just think about that for a second.

Now it gets worse.

Not too long ago, I attended a meeting on the Hill with several Republicans. They were very proud that they had proposed over $40 billion in budget cuts for FY 2006.

Then someone else at the meeting reminded them of two things. First, increases elsewhere more than negated their proposed cuts. Government was still going to grow. Second, $40 billion isn’t even a rounding error when you’re talking $2.5 trillion.

The Republicans were very offended when this was pointed out.

Then within two weeks, almost all of the proposed spending cuts were eliminated.

Now with the current round of hurricane relief spending, history is repeating itself almost exactly with the RSC’s “Operation Offset.”