Associate Director of Technology Policy Studies and Iowa native Ryan Radia takes a look at how the different strains of Republican voters are deciding on their party’s presidential nominee. In the years to come, Radia believes that the GOP will need to reinvent itself ideologically if it is to remain politically relevant.

Comments Off on CEI Podcast for January 5, 2012: The Iowa Caucuses

An Optimistic Take on the Election

Posted on November 3, 2010 | Comments Off on An Optimistic Take on the Election

CEI President and Founder Fred Smith and I have an article in The Daily Caller expressing cautious optimism about yesterday’s election results. Our main points:

-We are (cautiously) optimistic because voters turned out in droves to make a statement against big government, not to endorse GOP policies. But no reforms will happen unless people keep fighting for them.

-Activists have a lesson to learn from the Bush-era anti-war movement. Anti-Iraq War protestors vanished into thin air almost the moment President Obama was elected. They gave up. That’s one reason there are still 50,000 troops in Iraq and America’s presence in Afghanistan has doubled. The next few years will be the true test of the tea party movement. Will it grow complacent in victory?

-GOP politicians have a lesson to learn from their 1994 victory and subsequent fall from grace. The 1994 Republicans gave up as reformers after about six months. Voters kept them around because they did a tolerable job of checking Clintonian excesses. But six years of one-party rule under Bush were more than enough to show that Republicans were far more concerned with staying in power than with shrinking government. Federal spending roughly doubled under Bush, and that was enough to give them the boot.

It will be interesting to see what happens. The 2010 election might be nothing more than a blip on the radar. Or it could be the start of a genuine reform movement that will take on the coming entitlement crisis. We’re hoping for the latter.

Comments Off on An Optimistic Take on the Election

Posted on October 19, 2010 | Comments Off on The East German Immigration Model 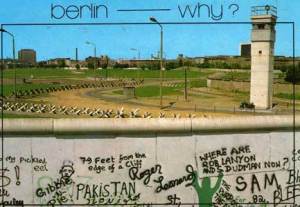 A U.S. Senate candidate in Alaska thinks that the U.S. should follow East Germany’s example when it comes to immigration. GOP nominee Joe Miller told a town hall audience, “The first thing that has to be done is secure the border. . .  East Germany was very, very able to reduce the flow.  Now, obviously, other things were involved.  We have the capacity to, as a great nation, secure the border.  If East Germany could, we could.”

He’s darn right “other things were involved.” See CEI’s video on the Berlin Wall for details. What a terrible choice of example.

It’s almost certain that Miller doesn’t really want the full-on East German border enforcement model. It was probably just a tasteless slip of the tongue. But he clearly favors a border fence. Which, of course, he should oppose if his goal is actually to reduce illegal immigration.

If Miller wins his election, there is a lot he can do to reduce illegal immigration. Building an American version of the Berlin Wall is not one of them. As Alex Nowrasteh and I wrote, “The immigration black market only exists is because the government has made the legal market as cumbersome as it can.”

Miller should make legal immigration less cumbersome. People will come to America, no matter what. That’s what happens when you have one of the freest, richest, most dynamic nations on earth. That’s a fact of life that our broken immigration system does not take into account.

Neither, apparently, does Joe Miller.

Comments Off on The East German Immigration Model

Is this Grounds for Pessimism?

The budget for the federal government is currently over $2.5 trillion. Just think about that for a second.

Now it gets worse.

Not too long ago, I attended a meeting on the Hill with several Republicans. They were very proud that they had proposed over $40 billion in budget cuts for FY 2006.

Then someone else at the meeting reminded them of two things. First, increases elsewhere more than negated their proposed cuts. Government was still going to grow. Second, $40 billion isn’t even a rounding error when you’re talking $2.5 trillion.

The Republicans were very offended when this was pointed out.

Then within two weeks, almost all of the proposed spending cuts were eliminated.

Now with the current round of hurricane relief spending, history is repeating itself almost exactly with the RSC’s “Operation Offset.”