Posted on February 8, 2010 | Comments Off on Regulation of the Day 112: Importing Pork Rinds 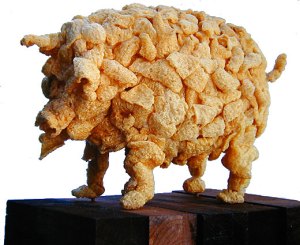 The federal government is loosening its restrictions on importing pork rinds from Brazil. Rudolph Foods, Inc., an Ohio company, owns a factory in Brazil, and stands to benefit from the ruling.

Competitors are up in arms. Citing exotic illnesses like foot-and-mouth disease, one competitor told The Wall Street Journal, “It just takes one pig” that is infected to spread a disease… “The risk is low, but the consequences are really high.”

If that is his strongest argument, then the case against liberalization is as weak as it gets. Instead of using the power of government to hobble its rivals, this company should go out and improve its product. Make its pork rind recipe even tastier. And cheaper. Use the import liberalization to its own advantage if possible.

Comments Off on Regulation of the Day 112: Importing Pork Rinds

Posted in Economics, Regulation of the Day, Trade