Posted on December 13, 2011 | Comments Off on Teddy Roosevelt’s Legacy 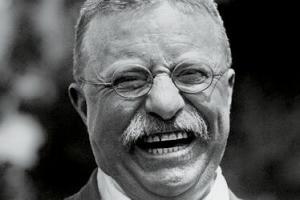 Modeling your re-election strategy on an obnoxious authoritarian’s failed third-party run for the presidency a hundred years ago is an interesting choice, but not necessarily a wise one. It’s a move of desperation, unlikely to work.

GOP front-runner Newt Gingrich calls himself “a Theodore Roosevelt Republican.” Despite (or because of?) T.R.’s many flaws, politicians from both parties have long found something irresistible about our pulpit-pounding 26th president.

But T.R.’s enduring appeal is an enduring mystery. What’s so attractive about Roosevelt’s political philosophy? A loudmouthed cult of manliness? A warped belief that war is a good tonic for whatever ails the national spirit? A contemptuous attitude toward limits on presidential power?

John McCain, the 2008 GOP nominee, also suffers from a Teddy Roosevelt complex, as Matt Welch details in his book McCain: The Myth of a Maverick. If there’s any lesson to be learned from presidential candidates’ shared T.R. fetish, it’s that only those truly in love with power can endure the the hell of the campaign trail to acquire it.

Comments Off on Teddy Roosevelt’s Legacy