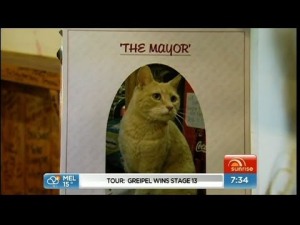 About 15 years ago, voters in Talkeetna, Alaska must have been very disappointed in their mayoral candidates, because a tail-less kitten named Stubbs won the election as a write-in candidate.

He’s still in office, and his policies are popular with his constituents:

“He doesn’t raise our taxes — we have no sales tax. He doesn’t interfere with business. He’s honest,” said Lauri Stec, manager of Nagley’s General Store, which doubles as the mayor’s office.

I wonder if Stubbs has ambitions to run for higher office. America could use more politicians like him.

This entry was posted in Political Animals. Bookmark the permalink.

One response to “Stubbs for Mayor”