According to a new poll, the average American thinks that 25 percent of the federal budget is spent on foreign aid (or, more accurately, government-to-government transfers). They would like it cut to about 10 percent.

The actual figure is under 1 percent.

As Aid Watch’s Laura Freschi points out, that means most Americans want to increase government-to-government transfers ten-fold from current levels while also cutting them in half.

That most people think like this is a major reason why cutting the federal government’s $3.5 trillion budget is so difficult. The issues that people get worked up about tend to be small potatoes, in budgetary terms.

Besides transfer payments to other governments, earmarks are another lightning-rod issue. But even if earmarks were abolished entirely, that’s only about 2 percent of the budget. It would put the smallest of dents in spending.

Entitlement spending is the single largest driver of current and future deficits. That’s where the battle is. Aid spending and earmarks are not threatening to bankrupt the country. Social Security and Medicare are. And those programs are extremely popular. No politician with an eye on 2012 would be willing to cut them.

The government has made promises it can’t possibly keep. But most people refuse to believe that. So they don’t. As a guarding mechanism, they instead make grand assumptions about how much things like transfer payments to other governments and earmarks cost.

The Washington Version of Spending Cuts

Posted on November 10, 2010 | Comments Off on The Washington Version of Spending Cuts 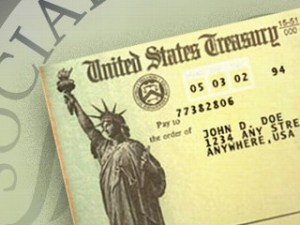 Here’s a letter I sent to Politico:

The title of your November 10 article, “Panel leaders propose Social Security cuts,” is inaccurate. A cut is when spending goes down. Social Security spending will go up if Erskine Bowles and Alan Simpson’s recommendations are enacted. They would increase spending at a slower rate than under current policy. But it would still increase.

An increase is not a cut. Not even in Washington.

Comments Off on The Washington Version of Spending Cuts