Regulation of the Day 116: Doodling on Desks 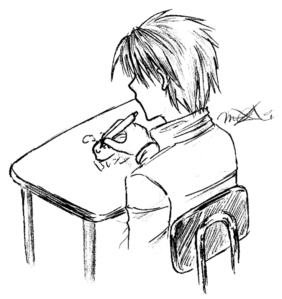 Many government schools have zero-tolerance policies. They are supposed to help discipline rowdy students. But they are inflexible. Too inflexible.

Alexa Gonzalez, 12, was arrested and put in handcuffs for writing “I love my friends Abby and Faith. Lex was here 2/1/10 :)” on her desk in green marker.

Seems a bit much. At the very least, she should be made to clean it off. Maybe given a day of detention. But haul her to the police station in handcuffs? Overkill.

The child is not described as a trouble maker. But now she has a criminal record. At age 12. This will not help her when she applies to college in a few years. Or when she applies for a job during high school.

Ms. Gonzalez is not the only victim of one-size-fits-all zero-tolerance policies. The CNN story linked to above also mentions the plight of Chelsea Fraser. As a 13 year-old, she was arrested and handcuffed for writing “okay” on her desk.

CNN notes a third child who met the same fate. She is known in court documents as “M.M.”

In Chicago, 25 students were arrested because of a food fight. Arrested. Try detention next time. Let the punishment at least be in the same order of magnitude as the crime.

Comments Off on Regulation of the Day 116: Doodling on Desks