Regulation of the Day 188: Cat Licenses 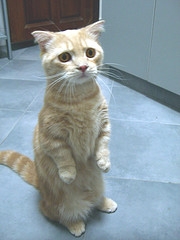 San Diego, California’s city government is going through tough financial times. But legislators have found a lucrative possible revenue source: the city’s 373,000 cats. The city government could raise a lot of money by requiring cat owners to purchase a license for their little friends at $25 each.

Compliance rates for pet licenses tend to be low. Two thirds of Los Angeles’ dog owners don’t bother licensing their dogs, even though they’re required to by law. With cats, compliance would probably be even lower. Many cats are indoor-only, and are thus easy to hide from regulators. They don’t need to be walked in public daily like dogs do.

The city seems to be fine with that. It just wants some money, according to NBC’s San Diego affiliate in an article cleverly titled “Cat Owners Hiss at Licensing Proposal:”

If just 5 percent had been registered at $25 a head, the auditor’s office says the city could have saved $536,000 over the past three fiscal years.

Curiously worded. For the city government to save money, it would have to spend less. Here the city auditor is saying the city government would save money by taxing more. For that statement to be true, residents’ money couldn’t actually be theirs. It would be the government’s. They’re just nice enough to let the citizens have some of it. That ugly philosophical presumption alone is enough to discredit this proposal.

There’s more to it, though. Collection costs and establishing a licensing system would eat into the revenues.

Then there are the unintended consequences. Every city has stray cats. To keep their numbers in check, some kind souls will take them off the streets, have them spayed or neutered, then release them. Doing so would require a $25 license, even if the cat only stays with the person long enough to recover from the surgery. That means a lot of people wouldn’t bother with their good deeds, and San Diego would have even more stray cats.

Other cat owners would refuse to take their cats to the vet, where licenses would be issued. It can be expensive to get cats their shots and have them fixed. Making it even more expensive means fewer people will do the right thing. That’s bad for the animals’ health and life expectancy.

UPDATE: This is already happening in North St. Paul, Minnesota. Reader Maggie sends along this article:

Doug and Annette Edge thought they were doing the right thing for their community.

With feral cats roaming their North St. Paul neighborhood, the couple trapped the wild felines, took them to be sterilized and vaccinated, and then released them back into the city.

In April, North St. Paul charged Doug Edge, 45, with two misdemeanors: failing to have a cat license and allowing domestic animals to run at large. Edge faces a fine and up to 90 days in jail.

Posted in Regulation of the Day, Taxation