Posted on November 19, 2009 | Comments Off on New Trotsky Biography 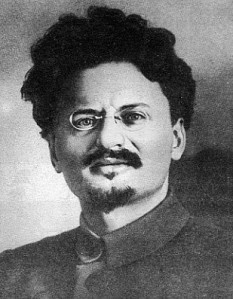 Robert Service’s new biography of Trotsky is reviewed in today’s Wall Street Journal. Having read Service’s excellent biography of Lenin a few years ago, this seems like a book worth reading. Joshua Rubenstein’s thoughtful review touches on some thoughts about socialism and socialists.

Socialism had three major failings. The first is what economists study most closely. It is the impossibility of economic calculation under socialism, because of the rejection of prices and money as a medium of exchange. Whether you support socialist ideals or not, it is literally impossible to achieve. Do away with prices and currency, and they will emerge in a different form. They are part of human society.

The second aspect of socialism intrigues philosophers: socialism genuinely sought to change human nature itself. People as they currently are are in no shape to realize Marx’s vision of communist society. So part of the communist program was to actively mold and change people so that vision could one day become a reality.

Before Marx came along, Plato’s Republic and Thomas More’s Utopia were also written about societies with a fundamentally changed human nature. More, knowing his ideal to be impossible, coined the word “utopia,” which literally means “no place.” His book is a pleasant dream (for a collectivist at least), but More knew it was one that could ever come true. We are they way we are. And we’re stuck that way, for better or worse.

This leads us to the third aspect of socialism, which most concerns Trotsky. This is, for me, the most remarkable part, and the most chilling. It is the sheer violence that accompanied Marxism-Leninism everywhere it was tried. And I mean everywhere. Every single country to adopt communism had a checkered human rights record. No exceptions. Not one had anything resembling freedom of speech or press, or due process, or property rights.

Most historians now estimate that communist governments killed around 100,000,000 people. Mostly their own citizens. At no other point in human history have governments been so murderous of their own people. No other ideology has had consequences so bloody as Marxism and its variants.

One reason for the violence is that it allowed the governments to maintain power; resistance is less likely when the prevailing climate is of fear. Another is that human nature is stubborn. If it is to be changed, force is required. But, of course, the basic tenets of humanity are immutable. We are who we are.

Communist leaders, including Trotsky, were simply chilling. Many of them come off as sadists. They seemed to actually enjoy bloodshed. Revel in it. Yet Trotsky still has his admirers today. They need to answer for why they look up to someone who would even have thoughts like the following, let alone give voice to such brutish impulses in public speeches:

“The strength of the French Revolution,” he shouted to a group of revolutionary sailors, “was in the machine that made the enemies of the people shorter by a head. This is a fine device. We must have it in every city.” And have it they did. Once in power, Trotsky advocated show trials and the execution of political prisoners; he suppressed other socialist parties and independent trade unions; he pushed for the censorship of art that did not support the revolution; and he created the institutions of repression that were later turned against him and his followers.

Comments Off on New Trotsky Biography