Posted on June 14, 2010 | Comments Off on Regulation of the Day 141: Mandatory Fire Sprinklers 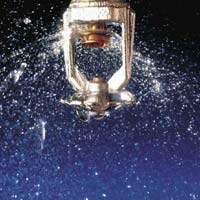 Politicians love it when housing prices go up. They think it’s a sign of a vibrant and growing economy. That high-price fetish is partially to blame for the housing crisis of 2008.

Officials in Cumberland, Maryland have not learned their lesson. They are doing all they can to boost local housing prices. For example, the city council is currently mulling requiring all new homes to install fire sprinkler systems. For a 2,000 square foot home, that would add $3,000 to $9,000 to the price of the home.

Potential homebuyers are questioning the wisdom of the idea; high and rising prices reduce demand for housing. It’s basic economics. If this mandate passes, fewer Cumberlanders will be able to afford a new home. For a city complaining about its aging housing stock, this is not wise policy.

But this isn’t just an economic issue. It’s a personal freedom issue. As one man told the Cumberland Times-News,

Cumberland resident Don Bohrer suggested that more — and louder — smoke detectors, and not sprinklers, are a reasonable solution. Bohrer cautioned against “Big Brother” government infiltrating private homes any more than already is done.

“We’re losing more of our freedoms every time you pass one of these silly things,” Bohrer said.

He’s right. One mandate isn’t that big of a deal, though this one is rather expensive. But when you add them all up – federal regulations alone add up to 157,000 pages – you see that regulators have created a monster.

Comments Off on Regulation of the Day 141: Mandatory Fire Sprinklers

Regulation of the Day 132: Fire Sprinklers

The U.S. tax code stands at well over 100,000 pages. All but the hardiest of souls hire professionals to do their taxes for them. Cries for simplification grow every year.

How does Congress respond? By introducing legislation to “amend the Internal Revenue Code of 1986 to classify automatic fire sprinkler systems as 5-year property for purposes of depreciation.”

Comments Off on Regulation of the Day 132: Fire Sprinklers