Regulation of the Day 164: Panhandling 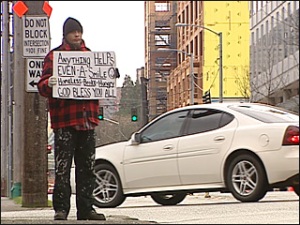 If Montgomery County Executive Ike Leggett gets his way, panhandlers will need a government permit to ask people for money if they’re near a road. When panhandlers solicit motorists at intersections, they often have to step into the street. Leggett believes this is a safety hazard that requires a legislative fix.

Roadside panhandling is already illegal under Maryland state law, so the county ordinance is technically redundant. But the state ban appears to not be well enforced; hence the local law. Leggett’s permit proposal is likely a backdoor ban. The permits will exist, and panhandlers can apply for them. But none will be issued.

But suppose a permit does get approved. This would violate state law, would it not? Of course, people still panhandle at intersections anyway. So maybe neither the state nor the county ban matters so much.

Comments Off on Regulation of the Day 164: Panhandling