Posted on January 17, 2019 | Comments Off on Don’t Trust Political Memes, and Don’t Share Them

Think of this post as a public service message.

In some ways, memes are the 21st century version of the comic strip or the political cartoon. They can be quite funny, and they make their point in just a second or two. Memes have been a boon for comic-strip-style humor. Someone needs to fill the void left by Calvin and Hobbes and The Far Side, and a lot of people have ably volunteered. Anyone with a joke and basic computer skills can make a funny meme, and millions of people can share the fun. National distributors no longer serve as gatekeepers and censors, allowing some unique talents to shine that would have remained dark just a decade or two ago. This has been a wonderful development.

But for many reasons, political memes are typically riddled with factual errors and offer little more than confirmation bias. They should be shunned, not shared.

Here is a quick statistics lesson from one political meme I saw making the rounds recently. That’s not to pick on this meme specifically. There are millions like it, just as bad, floating around the Internet. This is just one I happened to see, though I should note that Turning Point USA has a poor reputation, even by its genre’s low standards.

Also keep in mind that this meme is on the correct side of its issue. Imagine how wrong the wrong ones can be! As Frederic Bastiat wrote, “The worst thing that can happen to a good cause is, not to be skillfully attacked, but to be ineptly defended.”

Here is the meme: 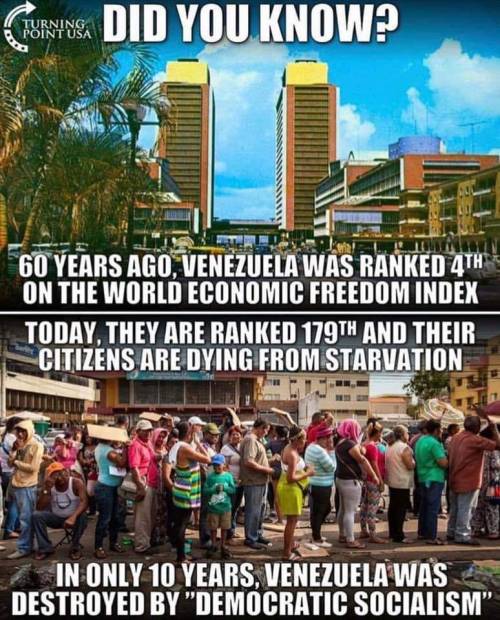 Here is a list of things it gets wrong.

1: This meme is undated and cites no sources.

2: There is no publication titled “World Economic Freedom Index.”

4: Venezuela does rank 179th in the 2018 Heritage/WSJ index. But it gives no rankings from roughly 60 years ago. If the 4th place figure comes from a different index, that is not a valid apples-to-apples comparison. But we don’t know where that figure comes from. None is cited. Google doesn’t turn one up, either. For all we know, some intern could have just made it up, and now people are sharing it.

5: Hugo Chavez was first elected in 1998. His brand of socialism was 14 years old when Turning Point USA was founded in 2012, not 10 years before this undated meme was created.

That’s five errors in one meme that took less than ten minutes to dig up. That says more about Turning Point USA and political memes in general than it does about Venezuela’s ongoing tragedy.

Don’t trust unsourced political memes, don’t share them, and take people who heavily rely on them as seriously as they deserve–even, or especially, if they share your ideological priors.

This entry was posted in Argumentation, Economics, Fun with Statistics, Media, Political Animals. Bookmark the permalink.