Regulation of the Day 232: Pulling a Rabbit Out of a Hat 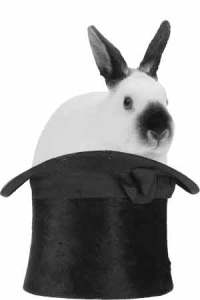 Marty Hahne is a magician in Missouri. He has been putting on magic shows for kids for almost 30 years under the nom de guerre Marty the Magician. Back in 2005, he got in trouble with the USDA. Turns out he was using an unlicensed rabbit for his grand finale of pulling a rabbit out of a hat. Hahne quickly found out that the USDA’s regulations for magicians’ rabbits, in force since 1966, are both strict and extensive.

Eight years later, the agency is still harassing him. Here are some of the indignities the USDA is inflicting on Hahne and his animal assistant:

Hahne has an official USDA license, No. 43-C-0269, for Casey — a three-pound Netherland dwarf rabbit with a look of near-fatal boredom. The rules require Hahne to pay $40 a year, take Casey to the vet and submit to surprise inspections of his home.

Also, if Hahne plans to take the rabbit out of town for an extended period, he must submit an itinerary to the USDA. The 1966 law that started all of this was four pages long. Now, the USDA has 14 pages of regulations just for rabbits.

Now, under new regulations, “animal exhibitors” such as Hahne are required to file written disaster plans to the USDA covering at least 21 types of disaster, from broken air conditioners to hurricanes. Hahne’s disaster plan for Casey is 28 pages long, and is considered short for its genre. An attorney was kind enough to draft it for him pro bono.

When the Washington Post picked up on Hahne’s story, it spread like wildfire on weird news sites, and the Internet had a collective belly laugh at the USDA’s expense. After this blow to its pride, the agency reluctantly announced that Secretary Tom Vilsack has ordered a review of the regulations, insisting that “common sense be applied.”

This is not the same as saying the agency will liberalize its strict magicians’ rabbit policy. But the phrase “common sense” does imply it.

This entry was posted in regulation, Regulation of the Day. Bookmark the permalink.

One response to “Regulation of the Day 232: Pulling a Rabbit Out of a Hat”