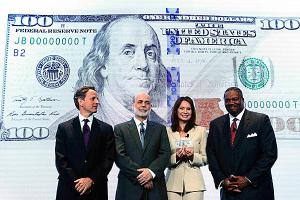 There is a lot of talk lately about the Fed’s quantitative easing policy. It is an indirect way of printing money, and also a huge mistake. It turns out the Fed can’t even print money the direct way without making mistakes. A new $100 bill that is harder to counterfeit has been rolling off the presses recently. 1.1 billion of them have been printed so far, at a cost of $120 million.

An official familiar with the situation told CNBC that 1.1 billion of the new bills have been printed, but they are unusable because of a creasing problem in which paper folds over during production, revealing a blank unlinked portion of the bill face.

A second person familiar with the situation said that at the height of the problem, as many as 30 percent of the bills rolling off the printing press included the flaw, leading to the production shut down.

The total face value of the unusable bills, $110 billion, represents more than ten percent of the entire supply of US currency on the planet, which a government source said is $930 billion in banknotes.

Coincidentally, these would be the first bills to feature Timothy Geithner’s signature.

One response to “Printing Money Troubles”