CEI Podcast for January 9, 2013: Reining in Sue and Settle with the REDO Act

Senior Fellow William Yeatman argues that the REDO Act, up for a House vote today, would limit a practice called sue and settle. Friendly activist groups sue allied agencies over missed deadlines, and the settlements typically include enactment of policies that the agencies and the groups both favor. Sue and settle is a form of regulation without representation, without input from Congress or voters.

Comments Off on CEI Podcast for January 9, 2013: Reining in Sue and Settle with the REDO Act

Like anything else, carbon emissions have both costs and benefits. Marlo Lewis, a Senior Fellow in CEI’s Center for Energy and Environment, discusses a new study finding that the carbon debate has some nuance to it, after all.

Comments Off on CEI Podcast for October 24, 2013: The Social Cost of Carbon

Posted in The New Religion

General Counsel Sam Kazman explains why, in his view, the Clean Air Act does not give the EPA authority to regulate carbon emissions. CEI is a co-petitioner in a lawsuit over those regulations that the Supreme Court has announced it will review during its current term.

A proposed rule issued today by the EPA would effectively ban new coal-fired power plants from being built. According to William Yeatman, Assistant Director of CEI’s Center for Energy and Environment, the consequences would be disastrous.

Comments Off on CEI Podcast for September 20, 2013: The EPA’s Latest Attempt to Ban Coal

Ron Binz is President Obama’s choice to head FERC, the Federal Energy Regulatory Commission. William Yeatman, in a new report, shows why Binz’s disregard for reliable, low-priced electricity, along with several ethical and ideological red flags, make him less than an ideal nominee.

Comments Off on CEI Podcast for September 19, 2013: A Controversial FERC Nominee

CEI Podcast for July 3, 2013: The EPA’s Assault on State Sovereignty

Comments Off on CEI Podcast for July 3, 2013: The EPA’s Assault on State Sovereignty

Earth Day: The Greener Side of Growth

Posted on April 22, 2013 | Comments Off on Earth Day: The Greener Side of Growth

It may not be a popular fact, but a fact it is: the environment is getting cleaner, and it has since about the mid-20th century. The question is, what caused this improvement? How can we keep it going? Over at Topix.com, my colleague Geoffrey McLatchey and I argue that the best answer for both questions is wealth creation:

Economic growth and environmental quality are not opposing values. They go hand-in-hand. Something happens to a country when its per capita GDP reaches about $5,000 (U.S. per capita GDP is about $48,000). At that point, families are certainly not rich. But they don’t have to worry as much about where their next meal will come from. They can afford to begin to take care of other needs, such as building sewage systems and other pollution-reducing infrastructure. Instead of using wood for heating and cooking, people can turn to more efficient fossil fuels, which means less deforestation. Farmers can afford to adopt modern techniques that produce more food with less land, leaving more left over for wildlife.

That’s the good news. The even better news is that greater progress is on the horizon. The number of people living in absolute poverty halved between 1990 and 2010, and the number continues to dwindle. Remarkably, this is happening even as global population increases. As more countries pass the $5,000-per capita benchmark, ecosystems around the world will benefit.

Read the whole thing here. Even if people do concede to the data and admit that the world’s environmental situation isn’t doom-and-gloom, they often give credit to the EPA. A glance at my recent EPA report card will hopefully disabuse people of that notion. Innovation, not regulation, is what will keep the environment healthy. That’s the lesson people should take from Earth Day.

Comments Off on Earth Day: The Greener Side of Growth

This week is Sunshine Week. According to its official website, Sunshine Week is “a national initiative to promote a dialogue about the importance of open government and freedom of information.” Myron Ebell, Director of CEI’s Center for Energy and Environment, is here to talk about CEI’s efforts to increase government transparency.

Comments Off on CEi Podcast for March 12, 2013: Sunshine Week 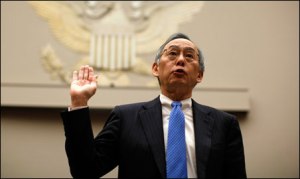 William Yeatman, Assistant Director of CEI’s Center for Energy and Environment, looks at former Energy Secretary Steven Chu’s record in office, who might succeed him, and what lies ahead in energy policy.

Comments Off on CEI Podcast for November 27, 2012: Rachel Was Wrong