Labor Policy Counsel Vinnie Vernuccio explains why today’s 7-2 Supreme Court decision in the Knox v. SEIU case is an important victory for free speech. The heart of the ruling is that people should not be compelled to pay for political speech with which they disagree. Just as people may not be forcibly silenced, nor can they be forced to speak.

Ideas Are More Powerful than Censorship

Posted on June 19, 2012 | Comments Off on Ideas Are More Powerful than Censorship

Another Benjamin Constant quotation; he is quite possibly the most underrated political philosopher of the 19th century. He deserves at least as much acclaim as Mill, Cobden, Bagehot, Bentham, Ricardo, and other better-known liberal giants of that era.

Now that I’m a bit further along in the book, expect to see a few more of these in the coming weeks. Constant can be dense at times, but he is surprisingly quotable. Ideas are more powerful than censorship. He explains why in a single sentence:

“Averting ideas you think dangerous by scorning them or suppressing them violently, is to suspend their present consequences only briefly, and to double their influence to come.”

The best response to speech you don’t agree with isn’t to scream, “shut up!” It’s to rebut it with speech of your own — on the merits. That’s what the marketplace of ideas is all about. May the best ideas win.

Comments Off on Ideas Are More Powerful than Censorship

Indiana is becoming a right to work state, which means unions will no longer be able to force workers who don’t want their representation to pay dues. Labor unions argue that this violates their right to free speech. Labor Policy Counsel Vinnie Vernuccio argues that taking away the power to collect mandatory dues is actually good for workers and unions alike. Workers will no longer be forced to pay for representation they don’t want, or political agendas they don’t support. Unions will also have to pay more attention to representing their members’ interests so workers will want to pay dues.

Comments Off on CEI Podcast for April 19, 2012: Right to Work Laws and Compelled Speech

Wikipedia, Reddit, and other popular websites all went black today to protest SOPA and PIPA, two bills currently before Congress. Critics charge that the bills could potentially shut down the Internet as we know it. Associate Director of Technology Studies Ryan Radia explains how the bills would work, and how they would indeed stifle free speech.

Comments Off on CEI Podcast for January 18, 2012: Dropping the SOPA

Regulation of the Day 201: Playground Chatter

Posted on November 28, 2011 | Comments Off on Regulation of the Day 201: Playground Chatter

Quebec officials are starting to listen in on what children are talking about on school playgrounds during recess. Are they trying to catch wind of terrorist plots? Stamp out juvenile drug use? Put a stop to bullying? None of the above, actually:

Diane De Courcy, the board’s chairwoman, said the approach will be persuasive, not punitive.

“There will be no language police,” she said. Instead, monitors who overhear children using their mother tongue during recess will simply remind them of the rules.

“If they are automatically switching to another language, (the monitor) will gently tap them on the shoulder – not on the head – to tell them, ‘Remember, we speak French. It’s good for you.’

A kindlier, more tolerant, and more realistic view is that people – even children – are perfectly capable of deciding for themselves which language they shall speak. Let them.

Comments Off on Regulation of the Day 201: Playground Chatter

Posted in Free Speech, Regulation of the Day

J.B. Bury on the Role of Church and State in History

Posted on November 26, 2011 | Comments Off on J.B. Bury on the Role of Church and State in History

When church and state compete against each other, the people are mostly left alone, and prosper. When they work together, well:

The conflict sketched in these pages appears as a war between light and darkness. We exclaim that altar and throne formed a sinister conspiracy against the progress of humanity.

Comments Off on J.B. Bury on the Role of Church and State in History

J.B. Bury on Freedom of Thought

“If the history of civilization has any lesson to teach it is this: there is one supreme condition of mental and moral progress which it is completely within the power of man himself to secure, and that is perfect liberty of thought and discussion. The establishment of this liberty may be considered the most valuable achievement of modern civilization, and as a condition of social progress it should be deemed fundamental.”

Comments Off on J.B. Bury on Freedom of Thought

Posted on July 5, 2011 | Comments Off on Regulation of the Day 181: Offensive Bumper Stickers 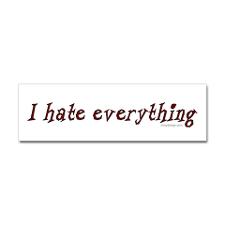 Tennessee State Rep. Gary Moore must be a very busy man. This year alone, he has solved the state’s budget troubles, fixed the broken education system, slashed the crime rate, and ended poverty.

Granted, I didn’t see any headlines about any of those things. No, the evidence for Rep. Moore’s achievements is much more indirect: he found the time to introduce a bill banning offensive bumper stickers. Surely he wouldn’t spend time on something like that unless he’d already solved his state’s more pressing matters?

There’s no way that fining drivers $50 if another driver takes issue with their bumper sticker would take precedence over reforming TennCare. The bumper sticker bill also covers movies being shown inside vehicles; surely Nashville’s solons wouldn’t worry about what cartoons parents are showing their kids in the back of their minivans until they found a way to raise stagnant standardized test scores.

On the other hand, maybe Tennesseans would be better off if their elected officials spent all of their time on minutiae. Whenever legislators do try to tackle the big issues of the day, wallets across the state get a lot lighter.

Comments Off on Regulation of the Day 181: Offensive Bumper Stickers

Posted in Free Speech, Regulation of the Day

Did the Citizens United decision place corporations ahead of democracy? Activist Annie Leonard thinks so. CEI’s Communications Director Lee Doren disagrees. Leonard views a strong government as an opposing force to corporate power. Doren points out in a new video that the more government does, and the more it spends, the more companies will flock to Washington to get a piece of the action. If you want to keep money out of politics, then keep politics out of our money.

Posted on December 7, 2010 | Comments Off on Dueling Headlines

Comments Off on Dueling Headlines